Discover the Great Towns of America! 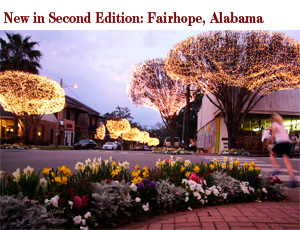 The nation's top getaways for a vacation or a lifetime competed for placement on this elite list of the best places to live and to vacation. All of the towns in the original (1998) edition were considered, along with towns across the nation. Criteria were that the town be under 80,000 in population; were located in spectacular settings (mountains, lakes, oceans, or varied terrain), and have manmade attractions, restaurants and lodgings that enhance the charm and usability of the spectacular site.

In the intervening decade since the premier guidebook was released, a dozen towns improved their status so spectacularly that they overtook some of the towns in the original guidebook. The displaced dozen remain great, but for now have fallen behind in their relative appeal to the traveling public.